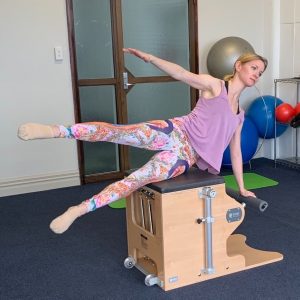 Pilates conditions the whole body. No muscle group is overtrained or undertrained. Your entire body is evenly balanced and conditioned, helping you to enjoy daily activities and sports with greater ease, better performance and less chance of injury. That’s why so many professional sports teams and elite athletes now use Pilates as a critical part of their training regime. Pilates can really make a difference in your health without taking a toll on your body.
Pilates is also an extremely flexible exercise system. Modifications to the exercises allow for a rathumbnailnge of difficulty ranging from beginning to advanced. Get the workout that best suits you now, and increase the intensity as your body conditioning improves.

Pilates focuses on developing dynamic strength, which means you are better able to support and stabilize your joints while moving. Research has suggested that Pilates is an effective method for reducing injury risk in sports.

We offer a range of classes such as mat class, duo class and private class with our experienced instructor. Click HERE to know more

Pilates was developed by Joseph Pilates, from Mönchengladbach, Germany. His father was a gymnast and his mother a naturopath.

During the first half of the twentieth century, he developed a system of exercises which were intended to strengthen the human mind and body. Pilates believed that mental and physical health were interrelated

In his youth he had practiced many of the physical training regimens available in Germany, and it was from these he developed his own method. It has clear connections with the physical culture of the late nineteenth century, such as the use of special apparatuses and claims that the exercises could cure ill health. It is also related to the tradition of “corrective exercise” or “medical gymnastics” as typified by Pehr Henrik Ling.

Pilates said that the inspiration for his method came to him during World War One, while he was being held at the Knockaloe internment camp on the Isle of Man. He developed his method there for four years, working on his fellow internees.

Joseph Pilates accompanied his method with a variety of equipment, for which he used the term “apparatus”. Each apparatus was designed to help accelerate the process of stretching, strengthening, body alignment and increased core strength started by the mat work. The best-known and most popular apparatus today, the Reformer, was originally called the Universal Reformer, aptly named for “universally reforming the body”. Eventually Pilates designed other apparatus, including the Cadillac, Wunda Chair, High “Electric” Chair, Spine Corrector, Ladder Barrel and Pedi-Pole.

Pilates published two books related to his training method: Your Health: A Corrective System of Exercising That Revolutionizes the Entire Field of Physical Education in 1934, and Return to Life Through Contrology in 1945.